New Year's question: What have you changed your mind about?

This year I was asked to contribute to the Edge Annual Question over at edge.com, the brainchild of third culture impresario John Brockman. Others contributors this year include Alan Alda, Chris Anderson, Richard Dawkins, Daniel Dennett, Freeman Dyson, Brian Eno, Howard Gardner, Rebecca Goldstein, Daniel Goleman, Steven Pinker, and J. Craig Venter. Brockman's published anthologies of previous years' answers are What Do You Believe is True Even Though You Cannot Prove It?, What Is Your Dangerous Idea?, and What Are You Optimistic About?

The question this year: What Have You Changed Your Mind About? My answer, entitled "What Matters," begins with a confession of a dark secret from my past:

As a teenager growing up in the rural American Midwest, I played in a Christian rock band. We wrote worship songs, with texts on religious themes, and experienced the jubilation and transport of the music as a visitation by the Holy Spirit. Then one day, as my faith was beginning to waiver, I wrote a song with an explicitly nonreligious theme . . . .

Find out what happens. Kudos to the good people at edge.com for continuing to ask the right questions.

Posted by Austin Dacey at 12:09 PM No comments:

I'm pleased to report that I've been getting some good book blurbs, like this one from Sam Harris:

Dacey seeks nothing less than to interrupt a suicide, and he has written a beautiful primer on how our secular tradition can be rescued from self-defeat. The Secular Conscience reveals how simplistic notions of privacy, tolerance, and freedom keep dangerous ideas sheltered from public debate. This is an extraordinarily useful and lucid book.

We have a pub date 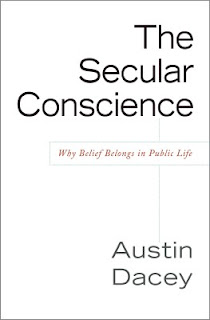 And the first round is on me. Unfortunately, I've got no time for that right now. My publisher has just announced that my book, The Secular Conscience, will be released in March 2008, and I'm too busy with pre-flight preparations.

It seems like this has been a long time coming. In one sense, I've been working on this book for ten years. In another sense, I wrote it in nine months. And now here it is just weeks away. Making a book is not at all like building a bridge if only because bridges come with a built-in a notion of what it means for them to be complete. With a book, the author has to make up not only what goes inside but also what counts as done. Did I finish, or did I just stop?

What I hope is that the ideas of The Secular Conscience will get to go on in their own ways, and what I want to believe is that the time will be right for them. Maybe I'll have that drink, after all.
Posted by Austin Dacey at 1:49 AM No comments: